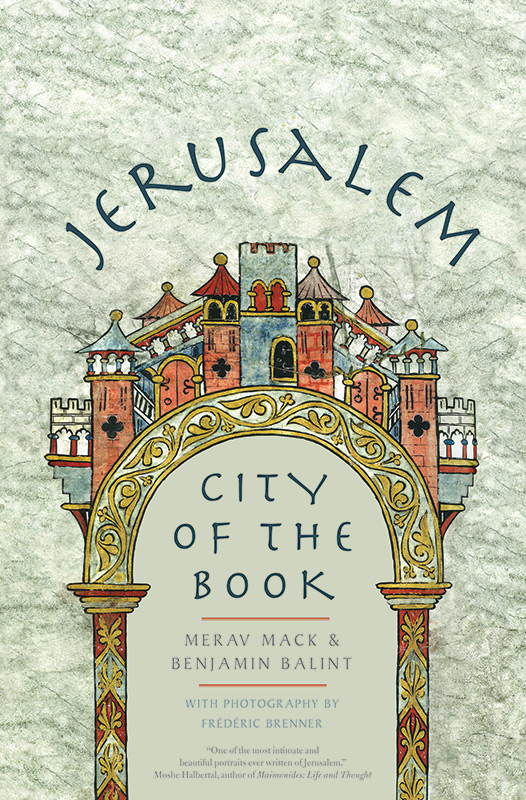 Jerusalem: City of the Book

A captivating journey through the hidden libraries of Jerusalem, where some of the world’s most enduring ideas were put into words.

In this enthralling book, Merav Mack and Benjamin Balint explore Jerusalem’s libraries to tell the story of this city as a place where some of the world’s most enduring ideas were put into words. The writers of Jerusalem, although renowned the world over, are not usually thought of as a distinct school; their stories as Jerusalemites have never before been woven into a single narrative. Nor have the stories of the custodians, past and present, who safeguard Jerusalem’s literary legacies.

By showing how Jerusalem has been imagined by its writers and shelved by its librarians, Mack and Balint tell the untold history of how the peoples of the book have populated the city with texts. In their hands, Jerusalem itself—perched between East and West, antiquity and modernity, violence and piety—comes alive as a kind of labyrinthine library.

PRAISE FOR JERUSALEM: CITY OF THE BOOK

Is there anything new that can be said about Jerusalem, the most contested city on earth, where three religions coincide and, indeed, collide? And yet this book, by a pair of Israeli writers, does precisely that: it creates for the reader a new landscape of the mind, and it reminds us why, even though we may feel we have heard enough of the Holy City, it remains a place of marvels.... This wonderful book combines the excitement of a detective quest with the joys of rummaging through a chest of jewels.

The three great monotheisms of the world share an obsession both with sacred texts and with Jerusalem. Seizing upon this double passion, Mack and Balint had the brilliant idea of exploring the city though its libraries. With the help of Frédéric Brenner’s haunting photographs, they have created a riveting chronicle of holy bibliomania.

In their exquisite and brilliant exploration of the intricacies of Jerusalem’s libraries, Merav Mack and Benjamin Balint provide us with one of the most intimate and beautiful portraits ever written of Jerusalem. In unraveling the written treasures of Jerusalem, the overlapping maps of the sacred of the three Abrahamic religions unfold before our eyes, constituting Jerusalem as a simultaneous space of sublimity, rivalry, rupture and return.

An unforgettable journey through the world of books in Jerusalem, and an unparalleled portrait of one of the world’s great cities.

Traveling across Jerusalem and beyond, two humanist flâneurs find shame and pride, secrecy and sacredness, and a palimpsest made of innumerable religious and secular texts and libraries. A wondrous journey.

For those who love Jerusalem, Jerusalem: City of the Book will be a welcome treat. But all those interested in what religions share, and how they may co-exist, will also learn a great deal from this lively, and often surprising book.

A marvelous book which brings alive the history over many centuries of Jerusalem’s books, libraries, and the librarians who have been—and still are—their guardians. Sensitively and thoughtfully making links between the contested and controversial past and the present, the authors illuminate how books and libraries can bridge divides and shape the future.

That rarest of books: an academic work that fuses dense scholarship with the surreal intrigue of a Borgesian story... a scholastic thriller stuffed full of ghost scrolls, forgeries, buried texts and thieving bishops.

Enlight­en­ing and fascinating.... This schol­ar­ly yet acces­si­ble book will pro­vide Jerusalem enthu­si­asts with a dif­fer­ent side of the city; it makes acces­si­ble pre­vi­ous­ly hid­den gems and show­cas­es a deep respect for the preser­va­tion of the writ­ten word.

The Jerusalem of reality, as Mack and Balint disclose in their mesmerizing narrative, is every bit as vivid as that of the imagination, often even surpassing it.... Mack and Balint clearly relished the task, and they transmit that relish to the reader.... Intriguing issues emerge at every turn in this book. What has Jerusalem signified, to whom, and why?"